You are here: Home / Back Care Tips / Yoga and Exercise 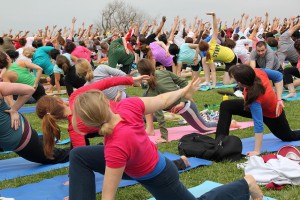 As a young boy growing up in Southern Ontario, I will admit I had some definite pre-conceived notions regarding yoga.  I thought of it as odd and it vaguely reminded me of flower children, peace and love.  Ultimately, I viewed yoga as “light exercise”, which to a young person is akin to viewing it as “useless exercise”

BOY, WAS I WRONG!

Approximately a year and a half ago I was persuaded to begin practicing yoga, and it was with a great deal of disbelief and disdain that I attended my first session.  Well, by the mid-point of that first session (drenched in sweat and feeling weak as a baby) I amended my earlier views on the efficacy of yoga.  So what is it about yoga that makes it so indispensable to a healthy lifestyle?

Yoga is a form of exercise that is several millennia old, and has a wealth of different varieties and forms. I will not pretend to be any sort of expert on the different styles of yoga, as yoga masters (or YOGIS) and trainers have to endure years of training in order to master their respective styles.  However, yoga is basically a form of exercise stressing balance and agility in combination with breathing techniques.  Let us assess each aspect of yoga accordingly.

Balance in the body and life in general is vital to maintaining health.  Yoga places the body in positions that are unusual (and sometimes uncomfortable) in order to increase balance and posture.  On the anatomic level Yoga is a fantastic means of strengthening the “stabilizer” muscles of the body.  Stabilizer muscles are not always the large, powerful muscles we think of when we get set to work out.  Instead, the stabilizer muscles of a given joint complex are often smaller, deep in the muscular tissue layers, and closely associated with the joint itself.  As these muscles are rarely worked, they tend to be prone to fatigue and this fatigue can lead to injury and damage to other structures.  Strengthening these stabilizer muscles can go a long way toward preventing injury in the first place.

Another benefit of yoga is that it increases the proprioceptive capacity of the body.  Proprioception is a neurological process by which our brain recognizes our body’s position and posture in the world around it.  Think of the ability of a cat, when falling off of an object, to right itself and land feet down before it strikes the ground.  While most humans are not quite so nimble, imagine slipping off of a curb.  Most people would roll an ankle slipping off of a curb, but a person who has actively trained their proprioceptive response would have a greater chance of maintaining balance and stability to prevent such an injury.

Agility can also be increased through yoga.  The many forms of yoga all have the central theme of stretching as a basic model.  If there is one aspect of working out that, in my opinion, is the most overlooked and underutilized it would be stretching.  In general, unless a given person is feeling stiff or sore he or she will not take the time to stretch as it is viewed as a waste of valuable gym or workout time.  In truth, stretching is a component of exercise that is vital to facilitate recovery times and increase range of motion for all joint complexes.  Your grandmother once told you that an ounce of prevention is greater than a pound of cure, and yoga can deliver a comprehensive stretch component to your exercise regimen.

Lastly, the breathing techniques central to the differing forms of yoga are a potent addition to any exercise program.  In a high-paced, frantic and high-stress modern world it becomes increasingly more important to take a time out and breathe.  An amazing benefit of yoga is that it allows the mind and body to RELAX.  The modern world has so many sources of stress and we are all so busy with family, friends, business etc. that it is a rare moment when we can take a step back and really let our minds and bodies rest.

Breathing, and the manner in which we breathe, is related to a host of bodily functions involving the lungs, the heart, the digestive system and the brain itself.  Slowing and controlling your breathing rate will give these and other structures the ability to relax and work more efficiently, and you will notice the benefit to your health and energy.

In summary, I do yoga once per week at the beginning of my exercise cycle.  I do not wear robes, I do not chant, and I do not make crazy “ohm” sounds.

I do run faster, I do jump higher, I do lift more weights, I do have more endurance, I do perform better, and I do it all because I have yoga as a part of my exercise regimen.

Give it a try, and you will find it does all of these things for you as well!