You are here: Home / Chiropractic Info / What is an Intervertebral Disc? 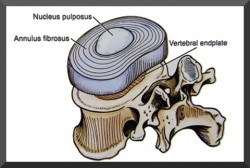 The spinal column is a wonder of bio-engineering and mechanical stability.  It supports our bodies from the time of our birth until the end of our lives and allows us the ability to walk upright and perform amazing activities.  Although the structures which allow this support, stability and motion are staggering in their scope, a step-by-step process will help in simplifying the basic model.

The intervertebral disc (abbreviation – disc) is a complex structure which occupies the space between two adjacent vertebrae in the spine.  Structurally, the disc is composed of an outer annular layer containing an inner layer composed of a viscous material.  These layers are referred to as the ANNULUS FIBROSUS and the NUCLEUS PULPOSIS.

The outer layers of the disc act as a structural component to resist motions and contain the nucleus of the disc.  In basic terms, imagine a mesh pipe hose such as you would find in a car engine or plumbing applications.  The mesh hose will bend and flex with no issues, yet when you attempt to pull/stretch/compress the hose it resists and maintains its shape and strength.  The annulus performs the same job for the disc and spine as a whole.

The structure of the disc allows the spine to be able to perform different motions and also provides a supporting role to the vertebrae of the spine in allowing movement.  Interestingly, the disc varies in its height over the course of our lives.  The jelly-like material in the nucleus of the disc is richly hydrated in the early years of our lives.  As we age, the disc “dessicates” or grows more dry and loses hydration.  Just like a sponge which has been squeezed, the disc collapses somewhat and we grow shorter.  That is why our grand-parents appear to “shrink” as they age.  This is another reason (of the many!!) to make sure to stay hydrated and drink plenty of water!

Further articles will look into the injuries which may occur to an individual in terms of the intervertebral disc, and how these conditions may be treated by the Doctors at Queen Street Chiropractic Centre.